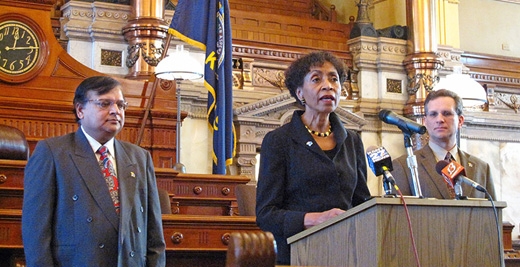 A prominent pharmaceutical scientist with 20 years of industrial research and development experience joined the KU faculty earlier this month, thanks in part to a five-year, $2.5 million financial commitment from the Kansas Bioscience Authority.

David Volkin comes to KU from Centocor R&D, a subsidiary of Johnson & Johnson, as the Takeru and Aya Higuchi Distinguished Professor in the Department of Pharmaceutical Chemistry. He will establish his lab in the Simons Biosciences Research Laboratories, focusing on vaccine and biopharmaceutical drug development. He also joins KUs Laboratory for Macromolecular and Vaccine Stabilization, located in the Multidisciplinary Research Building.

KU is known nationally for our outstanding School of Pharmacy and its research achievements, said Chancellor Bernadette Gray-Little. The cancer center initiative and strategic hires such as this one are building research and commercialization capacity in vital areas of human health that benefit all Kansans.

Volkin will have one more title as well. In November, the Kansas Bioscience Authority Board voted to name him an Eminent Scholar. That designation carries with it significant startup and ongoing support from the organization.

Also at the ceremony, it was announced that the Kansas Bioscience Authority Board of Directors has designated Rakesh Srivastava of the KU Cancer Center as an Eminent Scholar. He will be supported by a five-year, $1.8 million Kansas Bioscience Authority commitment. Srivastava came to the KU Medical Center last fall from the University of Texas Health Science Center at Tyler. He is a professor of pharmacology, toxicology and therapeutics.

Volkin and Srivastava are KUs second and third Eminent Scholars. Blake Peterson, the Regents Distinguished Professor of Medicinal Chemistry, was first in 2008.

Volkin held senior director positions for Centocor in pharmaceutical research and development from 2002 through 2009. Before that, he held similar management as well as research scientist positions with Merck Research Laboratories from 1989 to 2002. He also worked for two years as a research technician at the Research Institute of Scripps Clinic.

Volkins academic background includes a bachelors in chemistry from the University of California-San Diego and a doctorate in biochemical engineering from the Massachusetts Institute of Technology.

KU is an exciting opportunity, Volkin said. It has outstanding faculty in the School of Pharmacy and a clear vision for research and the education of future pharmacists. The west campus expansion is a tremendous investment, with two new research buildings in place and two other buildings  the School of Pharmacy classroom building and the Bioscience and Technology Business Center  scheduled for completion in 2010. I look forward to coming to Lawrence, and I very much appreciate the commitment the KBA is making in our research program.

Dr. Rakesh Srivastava (Ph.D., FRSM, FRSPH) is one such inspiring name that strongly resonates with his peers and students. Mr. Srivastava completed his M.Sc. from Memorial University of Newfoundland, St. John’s, Newfoundland, Canada. Rakesh Srivastava completed his Ph.D. from University of Guelph, Ontario, Canada. Subsequently he was awarded a Postdoctoral Fellowship at the National Cancer Institute, National Institutes of Health, Bethesda, MD. He went on to pursue Fellowship at the National Research Council, National Academy of Sciences. Dr. Rakesh Srivastava has been educated from the world’s topmost universities and has acquired his skill from the best sources. It is not just his education portfolio that is exemplary, even the graph of his services that showcase his contributions to the field of academics and science is simply amazing. Dr. Rakesh Srivastava started his career as an Assistant Professor at the University of Maryland, Baltimore, MD.